Kosher shave ice?  (Not shaved ice, as the grammar-geek in me is wanting to type, it’s actually called shave ice.)  This season, at Rincon-UHS football home games, the Kona Ice of Tucson truck has been selling Hawaiian shave ice, with 30% of the proceeds going to the Rincon-University Marching Band.

During football games, I am generally running up and down the stands, pouring water for the band.  I haven’t counted how many trips up and down, but it’s got to be at least 20-25 times, up and down the stands.  Last week, it was still pretty warm out, so when I saw people going by with giant, overflowing cups of shave ice, my curiosity was peaked.  It looked so refreshing!

Shave ice is different from a snow cone, in that the ice is shaved, not crushed.  The texture is closer to snow, as opposed to chunky, hard pieces.  While it’s been a long time since I’ve had a snow cone, I remember having to wait for some melting before I could taste the added flavors, which then pooled toward the bottom, in a sugary, syrupy concentration.

Hawaiian shave ice, since it is light and fluffy, doesn’t have that issue with the flavoring.  The flavors are consistent throughout the cone or cup of ice, as they distribute more evenly.  The texture really does feel light and fluffy, like snow.  You don’t end up with pockets of ice with no flavor, as in a snow cone.

Kona Ice of Tucson offers around 10 self-serve flavors, with dispensers mounted on the outside of the truck, so you can make your own custom creation.  They also have 30+ more flavors on the truck, which you can order, either as one of their menu creations, or your own custom creation.  Some of the flavors are sugar-free, and yes, some of the flavors are kosher!  While none of the ingredients in the flavors would be inherently nonkosher, they do offer some flavors that actually have a kosher certification, which is ideal for an event at a synagogue or the Tucson Jewish Community Center (think Bar / Bat Mitzvah or birthday party). 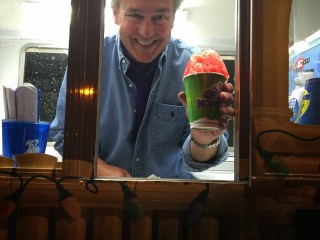 The truck is owned by the Shapiro family, who you might know from when they owned a Baskin Robbins shop.  I tried the sugar free Tiger’s Blood flavor, with a splash of peach and lime.  It was tasty and refreshing, and I will definitely try more flavors at the next home game.