Mmmmmm….. Tastes like my Grandma Lil’s baking!  This package of love arrived at my doorstep today.  The owners of the company Small Batch Baking Company actually sent me their product via 2-day delivery, but Tucson having lost a postal distribution center, these goodies didn’t arrive for almost a week.  They offered to send out a new batch, as each batch is baked, packaged and shipped while it is still fresh. 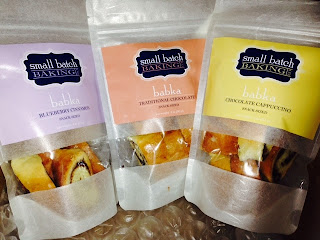 I am pleased to tell you that the babka are absolutely delicious, moist and very flavorful, so the shipping time was not an issue.  Small Batch Baking Company makes four varieties of babka: traditional chocolate, chocolate cappuccino, blueberry cinnamon and chocolate raspberry.  I tried the chocolate cappuccino first, and corny as it might sound, I was transported in time by sensory memory to my grandma’s rugelach, which had chocolate chips and cinnamon in the filling.  While rugelach is more like a cookie, and babka is more bread or cake-like, the filling tastes so much like my grandma’s baking… not overly sweet, but rich with chocolate along with the warmth of cinnamon. 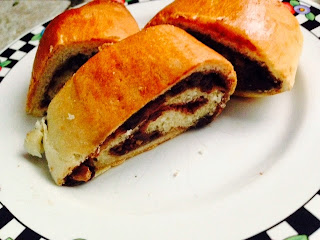 So, what is babka, exactly?  According to the Small Batch Baking Company website babka is “…an Eastern European sweet, leavened bread made with a rich dough.”  The dough is tender and buttery.  The most common filling is probably chocolate, at least according to Elaine Benes from Seinfeld.  In the episode, she wanted to buy a chocolate babka for a party, but had to settle for cinnamon when the bakery was sold out.  Cinnamon and chocolate pair quite well together, which is why I highly recommend the chocolate cappuccino flavor, but I enjoyed all three flavors I tried.

These babka are totally worth ordering.  While I am usually a proponent of baking something myself for special occasions, I could totally see taking these out of the packaging, putting them in my own container and letting people think that I made them… they really are as good as homemade.  Make sure you order two bags of your favorite flavor; one to eat and one to take somewhere when you need to bring a dessert.